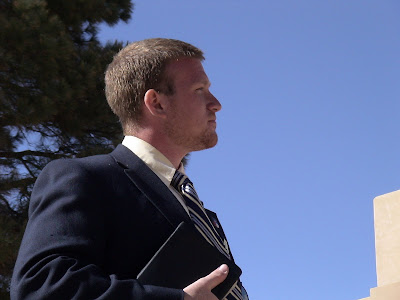 To the precious saints of God,

I am so blessed and honored to have you dear readers inquire of me and of the particulars of this trip. Thank you from the bottom of my heart. I apologize that I am usually behind in my updates; this is only because of limited internet access on the road, but I am giving all diligence to bless you with information on our progress. Thank you for your patience and prayerful involvement in these travels.

We spent four tremendous days in Albuquerque, New Mexico, preaching the everlasting Gospel at UNM, drawing large crowds consistently, dealing with many important issues, and seeing scores of lives impacted. Our ministering extended, not only on the campus itself, but also in the home we were staying at (more on this later). I truly felt God's presence was with us during this time. Praise the Lord! 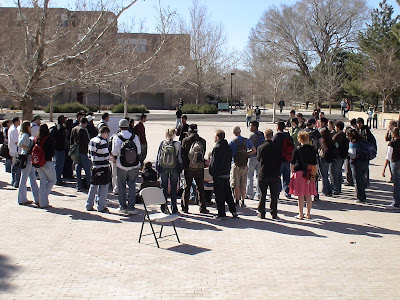 When we first arrived Miles began preaching at this certain walkway, but failed to draw any sort of hearing, so we sat down on some benches to wait. I began to pray silently, and felt that we should move right out into the huge courtyard in the center of campus. Miles asked if I would like to preach and I said I would. When we got to the courtyard, I felt the need to just preach a sermon, as a opposed to taking questions. So I preached the plain old Gospel message: Creation, the fall of man, and the cross of Christ. The acoustics were so good that the entire courtyard and beyond was booming with the Word of God! A large crowd gathered, sitting all around the courtyard, listening to the Gospel! After I finished, Evan took over and the meeting continued as normal, taking questions. The whole day was excellent, and when we had to go, late into the evening, many students still were hungry for more. "Tomorrow", we had to say.

The next day took a totally different turn. A large band of Muslims (young and old) came out specifically to oppose us, and set up a table right in the courtyard where we were going to preach. Nonetheless, we preached, and drew a huge crowd all day, though the topic throughout was Islam. I must add this, however, and I really don't know any better words to put this in, but the entire day Islam took a severe theological beating and both they and the crowd acknowledged it. We presented irrefutable arguments which they simply could not answer, and I believe many of the Muslims who came out to debate us had their faith radically shaken. Praise God! "And ye shall know the truth, and the truth shall make you free." (John 8:32) 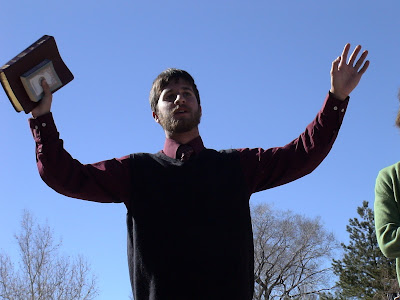 I preached almost the whole day with the Bible in one hand and the Qur'an in the other. 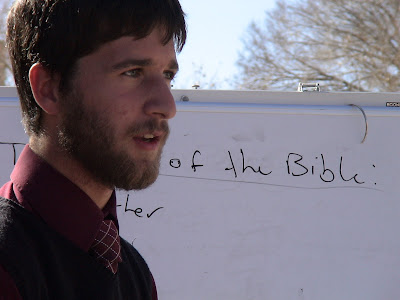 The crowd got so large and kept pressing in that we had to move several times all around the courtyard, so that our final place at the end of the day was not even where we began in the morning.

Another interesting thing that happened on Day two was that an orthodox Jewish man came out to the meeting and debated with me for a while about the Messianic prophecies in Scripture. At one point he put his finger in my face and shouted, "You're a heretic!", ensuing that because I am part Jewish I was an apostate from Judaism. It was strange; I imagine Jesus and the apostles were accused of the same thing. However, the next day this dear man came over to me before we started preaching and apologized for his outburst, shook my hand, and we exchanged a warm "Shalom" as he left. Oh, may God open his eyes to see Jesus. "But we preach Christ crucified, unto the Jews a stumblingblock, and unto the Greeks foolishness; But unto them which are called, both Jews and Greeks, Christ the power of God, and the wisdom of God." (1 Corinthians 1:23-24) 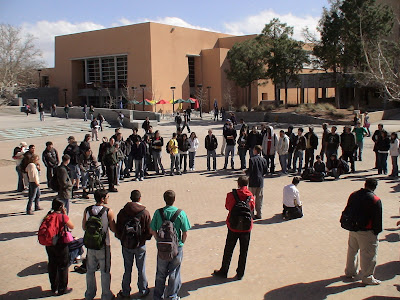 Day three held another great meeting. Evan and Miles did most of the preaching, because the day before I preached almost all day to the Muslims, but I sat to the side and spoke to small groups and did one-on-ones with people. Many Muslims has deep and honest questions for me on this day about their own faith and about Christianity. After the meeting, over supper, we each had incredible stories to share about people who were touched that day. Evan spoke with a young woman for a long time and she left with a new Bible. Miles also had some very similar conversations. I spoke with a young man who was into strange spiritualism and I believe he was convinced afterwards of the foolishness of it, and he told me with bright eyes about the deep faith of his Christian grandfather. Another young man was heavily into Roman Catholicism, but we all had a chance to talk to him and gave him a lot to think about. Glory to God! It was a day full of good fruit. 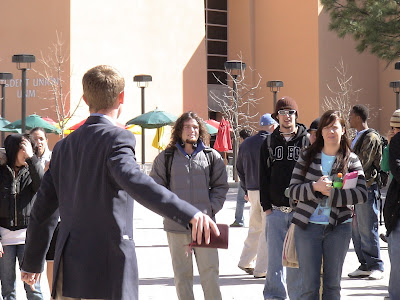 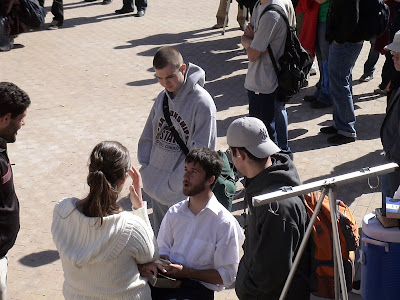 And lastly, day four, of which I have already posted a video: Apologia Evangelion. The meeting we had on this day was wonderful, with great apologetics caught on camera, something we wanted to capture for quite some time. By this point, the whole campus knew who we were by name, as we were in the newspaper and had been preaching for four days. Usually the final meeting consists of serious inquirers and relatively few hecklers. It was a honor to defend the Word of God and preach Christ to these students on at UNM. 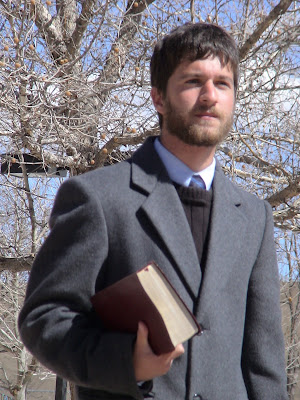 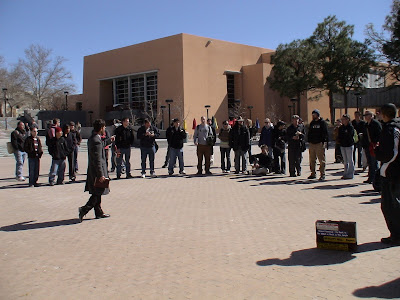 Miles closed the meeting by giving his testimony, and our time spent at UNM was completed. It was such an excellent stay, that the Christian community on campus was thrilled to have us there and we made a lot of great new friends.

Our host home, as well, was blessed by our presence; we lodged in the house of a very old lady, and as we talked about the things of the Spirit from day to day, she came over and asked us: "What is this baptism of the Holy Spirit you guys keep talking about?" We explained from Scripture that it is Jesus' promise of power to Church in these last days. Asking if she'd like to receive that gift, she said, "Yes, I would!" So I read to her from Joel, "And it shall come to pass afterward, that I will pour out my spirit upon all flesh; and your sons and your daughters shall prophesy, your old men shall dream dreams, your young men shall see visions: And also upon the servants and upon the handmaids in those days will I pour out my spirit." (Joel 2:28-29) Right there in the living room we took her hand and prayed that God would fill her with the power from on high! Afterwards, she was glowing, and gave us a great big hug as we were leaving, bless the Lord! Thank you Jesus for Your promises both to young and to old.

"Forasmuch as ye are manifestly declared to be the epistle of Christ ministered by us, written not with ink, but with the Spirit of the living God; not in tables of stone, but in fleshy tables of the heart." (2 Corinthians 3:3)

Glory to God for all these things. Bless you dear saints... may our Heavenly Father pour out upon you grace upon grace and may you in return exalt and magnify the Name of His dear Son, Jesus Christ the Lord. He is worthy! Much love to you in Christ,
Your servant,
-Eli
Posted by Eli at 1:18 PM

Eli, that is EXCELLENT news to hear, my friend! To hear that you guys have been doing so well in New Mexico is a great answer to longing prayers for success. I am glad to see you have all got the boldness and faith of David as you preach His word. I pray you will have many other successes in your travels across the country.

"May they give you confidence to fight well in the Lord's battles. Cling tightly to your faith in Christ, and always keep your conscience clear." 1 Timothy 1:18-19

Praise God for the time in New Mexico! My whole family was greatly encouraged by Apologia Evangelion. May God richly bless you and your work!

Praise God. Keep preaching dear brother with all the divine strength in you.