The Great Meaning of Metanoia 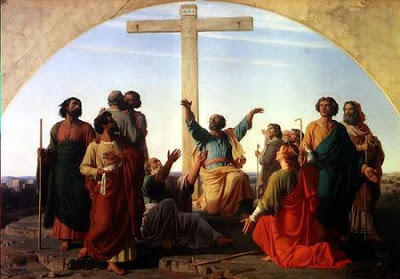 Your question about repentance is timely, as Brad, myself and several other brothers here in Logan have been discussing it at length. We recently discovered an outstanding little book on the subject written in the late 19th century, which you must get your hands on. It's called The Great Meaning of Metanoia by an Episcopalian minister named Treadwell Walden. He wrote it about a month after the Revised Version of the Bible was published, which was anticipated to be a corrective translation of the traditional English version (KJV). Unfortunately, the Revised Version left untouched the word "repentance", and Walden wrote to express his disappointment. Scholars who worked on the Revised Version and other New Testament professors wrote to Walden expressing their support of his position, admitting that the word "repentance" is a bad translation of "metanoia". Walden's original essay is brilliant and full of apostolic character. The book is out of print, but the University of California Library prints it on demand for somewhere between $15-$20 dollars (here). I think it is worth every penny.

Simply put, metanoia is a word filled with remarkable meaning by the preaching of Christ and the apostles. It is not a word that comes replete with its own meaning.  The English word "repentance", on the other hand, comes filled with its own meaning - it needs no supplementation by context. Repentance means to feel remorse or regret for your sins; its Latin root literally means "pain; suffering in view of being liable to punishment". Metanoia is Greek, and is made up of two words: meta and nous. Meta means "after" or "change", and nous is the Greek word for "mind". Etymologically, the word literally means "after-mind," signifying a change of mind: thinking one way, but then afterwards thinking another. It is the opposite of pronoia (pro-nous) which means before-mind: the mind or thinking you have before. Interestingly, there is another Greek word we frequently use in English that is related to metanoia: it is paranoia (para-nous). Etymologically, the word means beside-mind, or we would say "out of your mind", or "beside yourself". Paranoia is not being in a right mind, but having a mind that is off center - that is, not where it should be. If you compare metanoia and paranoia together, you get an idea of what the New Testament call for metanoia is: it is a command to change your mind and get it where it should be.

Of course, metanoia, when used as a command ("change your mind") needs supplementation by context; it needs to be filled with more information because we need to know what we are supposed to change our mind about. It can be something small (metanoia about how to spell "judgment"), to something enormously large (metanoia about your religious worldview). The sky is the limit with metanoia, and that is precisely the point of the remarkable function of the word in the New Testament. It is not restricted, like "repentance", to a narrow meaning of pain and sorrow for sin. It is a change of mind unto the gospel itself. The gospel is what the change of mind is about. The preaching of Jesus and the apostles speaks to the nous and men change or don't change their mind as they hear it. When a man changes his mind at the preaching of the gospel he has experienced metanoia. Thus, the proclamation of metanoia at the beginning of the New Testament is the doorway into the rest of the doctrine of the New Testament: Change your mind! About what? Listen! A radical mind shift in the religious world is about to happen... no, it is happening now... What we thought about God and the law and righteousness and forgiveness is all about to change. Hear! Metanoia and believe the gospel!

New Testament metanoia is a divine call to a radical mind shift in the way men think about religion. Therefore "repentance" is an unsatisfactory translation of the amazing word "metanoia" which gives a very different feeling to the preaching of Jesus and His apostles. Was the major proclamation of Jesus and the apostles "Repent! Feel sorry for your sins!"? Or was it "Metanoia! Think a new way!"? Do you see what a difference these two words make? The gospel calls us to a new way of thinking about religion. Whereas men think they are good, and that obedience to the law is the way of salvation, and that the law only requires partial obedience, and that most people won't perish, Jesus calls us to believe that there is none good, and that no one will be saved by obedience to the law, because the law requires perfect obedience, and that broad is the road that leads to destruction. The apostles call us to believe that the cross of Christ is the power and the wisdom of God, the only way we are saved and live, through faith. The world thinks that the cross is foolishness. Which word best summarizes this kind of preaching: "repent", or "metanoia"?

How did we lose this feature from our understanding and preaching of the gospel? Our loss of the meaning of metanoia came from early Latin Christianity. Early Latin theologians like Tertullian understood Christ's call in the gospel to be largely retrospective, a call to consider one's sinful life and to lament and amend it, rather than prospective, to hear the glad tidings of what God is and will do through Jesus. Jerome, when translating the Latin Vulgate, codified this understanding by translating "metanoia" as "paenitentiam agite" ("do penance"). But why, since the concepts are so different? It is because these early Latin scholars, while recognizing the Greek word "metanoia" meant to "change the mind", did not understand what the New Testament gospel of grace was all about, and consequently, since the word is hollow and requires filling, they filled the word metanoia with something other than  with what Christ and the apostles filled it. They interpreted the mind change to be changing your mind about how you are behaving - to regret your sinful lifestyle and to amend your life, rather than as changing your mind about the way of righteousness, i.e., that righteousness does not come through the law but through faith in Christ. Having interpreted the call to change your mind this way, the translators thought it would be more helpful to skip the more hollow word "metanoia" with the fuller paraphrase "paenitentiam agite", which they believed best communicated the purpose of the mind change. Thus they paraphrased the word metanoia as they thought best; they did not translate the word. And it stuck. The Latin Vulgate was the standard Bible in the West for over a thousand years, and therefore this erroneous paraphrase, "paenitentiam agite" ("do penance"), became deeply rooted in the Church's vocabulary, teaching, and moral imagination.

By the time of the Reformation, the theology and practice of penitence was so embedded that even the Reformers struggled to see clearly enough to root it out. Though they rightly saw afresh that the gospel of Jesus Christ was all about righteousness through faith apart from works, they continued to confuse metanoia with penitence, and Protestant history has witnessed an awkward and uncomfortable effort to fit the salvific necessity of penitence alongside the proclamation of sola fide. The proposed solution to the problem was to move repentance from one side of salvation to the other, so that, instead of having to repent in order to be saved (as the Roman Catholics saw it), the Reformers argued that repentance was a fruit and effect of being saved. In this way, salvation produced the amended life, but was not dependent upon it, so preserving the gospel of grace. However, while it is indeed true that salvation produces the transformed life and not the other way around, the Scriptures in fact teach that that in order for men to be saved, they must "metanoia" (e.g., Luke 13:3, Acts 3:19, et al.). The real problem was not in the order of salvation and repentance, but in the word "repentance" itself. The Roman Catholics understood the order correctly, but had the wrong definition of metanoia, while the Reformers - despite grasping the gospel correctly - understood both the order incorrectly and had the wrong definition of metanoia! This incorrect order and definition has caused the uncomfortable juggling of sola fide and penitence within Protestant history. What is needed is to simply see the true meaning of metanoia.

Metanoia is the paradigm shift which the preaching of the gospel both introduces and commands reception. It is the call for men who are ignorant of the righteousness of God by faith to see this new and living way of righteousness in Christ and the futility of their own attempt to be righteous by the law. The good news for sinners is that as sinners we are "justified freely by His grace, through the redemption that is in Christ Jesus" (Rom. 3:24) through nothing but faith alone. "To the one who does not work, but believes upon Him who justifies the ungodly, his faith is counted unto righteousness" (Rom. 4:5). This is a radical message that upends our natural religious sensibilities and requires a powerful change in mind about God, ourselves, and grace, which will in turn, of course, result in a renewal of our entire lives.

"'Sirs, what must I do to be saved?' And they said to him, 'Believe on the Lord Jesus Christ, and you shall be saved'" (Acts 16:30-31). "The Lord is... not willing that any should perish, but that all should come to metanoia" (2 Pet. 3:9). God calls sinners to eat freely of the bread of life, the broken body and shed blood of His Son. This is a meal He has set for the ungodly, not for the righteous. He wants sinners to eat of it. God sees our dire need and says, "Eat, sinner, and live! Believe on the Lord Jesus Christ! Look and your soul shall be filled! Do not think that you must worthy to receive My salvation. Behold and believe My righteous, generous grace for you revealed in the cross of Christ. Metanoia!"

I hope this is helpful to you, J---. I love you, dear brother, and pray for you to have wisdom and clarity in this matter. Looking forward to hearing from you again,