In Defense of the Doctrine of Justification Through Faith Alone 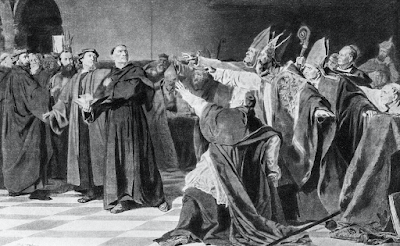 I wrote this for a group of Roman Catholics who were discussing Martin Luther and his translation of Romans 3:28.

I am a Protestant, a believer in justification through faith alone. I believe Luther and Protestants are getting unfair treatment here. Please bear with me as I seek to explain our view.

When Martin Luther added the word “alone” to Romans 3:28, he wasn’t corrupting the text, but emphasizing it. The Protestant conviction that justification is by faith alone doesn’t come from Luther inserting his own idea into the Bible, but it comes from the whole teaching of Romans 1-5 and many other places in Scripture. Luther came to this conviction regarding justification while studying Romans–when he realized that God provides the righteousness He requires of us (as Augustine taught), and that this gift of righteousness is received by faith apart from works, i.e., by faith alone.

In order to understand Luther and Protestants you must understand that to them faith and works are different principles, they aren’t just things among other things to do. Faith is a principle that is by nature different than the principle of works. Faith (pistis) means believing and trusting, while work (ergon) means expending energy to accomplish or procure results. These two principles encompass all things, and when the Bible rejects one category as the means of justification (as is explicitly done in the Book of Romans and elsewhere–works are excluded), that necessarily leaves “faith alone.” Thus faith alone is taught in Romans, and Luther simply was making explicit what is there in order to help others see. I don’t support adding additional words in your translation if your objective is to provide a word-for-word translation of the Bible, but if your translation is seeking to convey thought-for-thought–what is often called the “Dynamic Equivalent”–then doing so is more than legitimate. We have lots of paraphrase, thought-for-thought Bibles today which do the same thing.

By way of example, here’s Romans 4:4-5. Notice the two principles:

It’s all about the principle of the thing. If you work for X and get X on the basis of the work, X is not given to you by grace. If work must be done for justification, and having done work you receive justification, justification is not by grace (compare Romans 11:6). If work is anywhere in the condition, and that condition is met by you, the “reward” is owed to you by way of obligation, not grace. However, St. Paul states here that this is not how justification with God works at all. On the contrary, to the one who “worketh not yet believeth”–notice, faith is not a work, for we do not work but instead believe–God justifies that believer; and notice, even though that believer is “ungodly!” This, friends, is the very essence of the Protestant doctrine of justification. Even though we are sinners and are not godly, without work we believe in Christ and are justified. Apart from work. Work is not part of the condition, otherwise it wouldn’t be by grace. This, as Taylor mentioned in his video, is exciting and liberating for so many people (particularly those who feel themselves to be hopeless moral failures), and I believe God meant it to be such a glorious word of encouragement and hope for them. And as Paul says elsewhere, “saved by grace through faith… not of works, lest any man should boast” (Eph. 2:8, 9). A careful reading of Romans 3 confirms what I’m saying, and shows that works are not a part of the condition of justification, otherwise 1) justification wouldn’t be by grace, and 2) we would be able to boast.

And what do we do with James? It’s true that Luther and many Protestants struggled with James, but to their credit they all in the end opted to keep James, believing the contradiction to be only apparent, not real (and indeed there is no contradiction). Their struggle with James is only due to their firm conviction that the Bible teaches we are justified by faith apart from works, as indeed we just saw that it does. In fact, whoever doesn’t at first struggle with James has probably not firmly grasped and digested the Scripture’s teaching on “faith without works”. James’s language of course leads to what seems a contradiction–let’s be fair.

But Protestants do have an answer, and have had one for a long time: it is that our faith in Christ cannot but produce works, or to put it another way, what we believe inevitably affects how we behave. I don’t think anyone will disagree with that. If you claim to believe something but your alleged faith does not produce the necessary and inevitable actions that corresponds to such a faith, then you really don’t have faith. James illustrates his doctrine so we cannot misunderstand: Abraham sacrificing his son Isaac and Rahab (the harlot) hiding the spies demonstrated that they believed God. And since they believed God they were justified. Their works still didn’t justify them, their faith did. The presence of works signaled the presence of faith, and the presence of faith justified. Luther and Protestants have never seen faith as static: “Oh, it is a living, busy, active, mighty thing, this faith,” said Luther. The classic Protestant dictum is “We are saved by faith alone, but the faith that saves is never alone”; it produces works. And of course it does: how can a person believe that God loves him so much to save him by grace as a gift through faith, and not fall in love with such a beautiful God? That is the constant witness I hear from Protestant people. The grace of God, so understood, deeply affects them.

“Long my imprisoned spirit lay,
Fast bound in sin and nature’s night;
Thine eye diffused a quickening ray—
I woke, the dungeon flamed with light;
My chains fell off, my heart was free,
I rose, went forth, and followed Thee."

Most importantly, however (and let this not be missed), the works that are produced do not demonstrate that the person is good and moral, but that the person believes. Rahab’s action of hiding the spies didn’t make God say, “My what a good and moral person you are, Rahab”, but “You believe in Me”, and as an ungodly sinner she was therefore justified. This, I believe, is the clear teaching of James, and the only way Paul and James are reconciled. And it reconciles them nicely. If we were instead to say that works were in fact a condition of justification, alongside faith (rather than simply the evidence of faith), then we would have an unmistakable contradiction between Paul and James. Thank God we do not!

Thank you for listening and considering my words.
Humbly,
-Eli
Posted by Eli at 5:41 PM No comments: