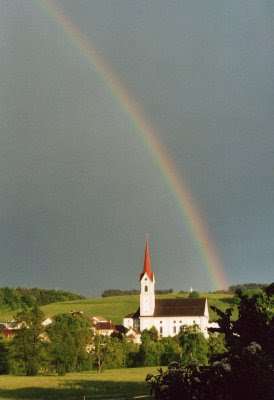 "For God so loved the world, that He gave His only begotten Son, that whosoever believeth in Him should not perish, but have everlasting life." - John 3:16

I scarcely believe there is a greater passage in all of Scripture than John 3:16. There is a reason why it is so famous: this verse captures the essence of the whole Bible in one short, simple sentence. Martin Luther called it "the heart of the gospel", and, "the gospel in miniature", and I think we can certainly agree with him.

There is nothing particularly complicated about John 3:16; it is very straightforward. The most simple man on earth could figure it out. Yet, while discovering its meaning takes only a moment, plumbing its depths requires a lifetime and more.

Let us look at this beautiful love-note.

"For God..." That this is speaking of God the Father, the Creator and Judge of heaven and earth, is evident, for it says He "gave His only begotten Son". The thing to notice here is that God the Father is the initiator, the great architect of the gospel of grace. The gospel is not about Jesus Christ, the hero, throwing Himself between God, the antagonist, and the world, the victim. The Trinity does not play 'good cop, bad cop'. Unfortunately many people have such a view; they see Jesus as the loving Savior who saves us from the terrifying God of the Old Testament. That God is terrifying in the Old AND New Testaments is not up for questioning, for He IS terrifying, and rightfully so! God is holy, and His holiness by its very nature defines law, and the law justly condemns the wicked thoughts and deeds of sinners, and purges them. A sinner ought to tremble before God. But here is where many people stop, and by doing so fail to see the true glory. God is holy, but holiness involves so much more than justice! God's justice is uncompromising; sin cannot-not be punished, but the God of the Old and New Testaments is also the God who is love.

And so it is we find in John 3:16 that God the Father, the just Judge of all the earth, who will not slacken His judgment, is the very One who is taking up the world's cause. Therefore, it is not as when a felon commonly needs a lawyer to defend him against a State which laws he broke, but rather that the State itself sets itself in the felon's defense against itself! What a marvelous unusual mystery! God Himself, before Whom we all stand guilty of murder, picks up our case. That is marvelous beyond words. The ancient world before Christ had no concept of this kind of benevolence from the gods; it was completely unheard of. One scholar writes: "No Homeric deity ever will be found to make a personal sacrifice on behalf of a human client." Another, commenting on John 3:16, "This attitude of God toward the world is in suggestive contrast with that in which the gods of paganism are represented." The gods of paganism were only served, and needed to be appeased by the sacrifices of men. We fail to appreciate the titanic announcement the gospel of God was when it was preached nearly 2000 years ago because our current generation has grown accustom to hearing of "the love of God" and has lost nearly all reverence for anything that is above ourselves. That men should serve God is not in question; nor did the pagans have it wrong when they intuitively knew that sin needed to be atoned for... but the concept of God stepping into men's vile existence and taking up their undeserving cause on their behalf for no other reason than love was completely and totally out of the box.

"...His only begotten Son..." It is a true saying that you can tell how valuable a thing is to someone by how much they are willing to pay for it. What value, then, must God place upon fallen humanity that He would give up, for their sake, His Son? And not only His Son... but His only begotten Son? Why? Someone asked me an excellent question the other day: "Does this mean that God loves the world more than His Son?" No. But what it means is that God loves the world as much as He loves His Son. This is an incredible mystery, and I dare not presume upon anything... yet the wonder is, that God is seeking and embracing undeserving, defiled people who have a right to nothing but death, and is bringing them into the glorious eternal relationship that exists between the Father, the Son and the Holy Spirit, calling them, too, His own precious sons and daughters (Romans 8:15-17, 29; Ephesians 1:5; Hebrews 2:10; 1 John 3:1). It is the eternal love of the Father for the only begotten Son that extends to all who believe! "I in them, and thou in me, that they may be made perfect in one; and that the world may know that thou hast sent me, and hast loved them, as thou hast loved me." (John 17:23) A glorious mystery indeed!

The sacrifice of God's Son is not a novelty of the New Testament. It is the central theme of the entire Scriptures. From the very genesis of Genesis, the story of redemption is foretold in every history, type, psalm and prophecy; the story of God offering His Son up as the sin-bearer for His people. "All things must be fulfilled, which were written in the law of Moses, and in the prophets, and in the psalms, concerning me." (Luke 24:44) Because Adam sinned, mankind was sentenced to die, but God, who is rich in mercy, provided the Lamb that would save men from their sins: by bearing their sin in His own sinless body on the cross, God's legal demands against sin would be satisfied, and Jesus, through death, would bring eternal life to dead men. This is "the way" without which "no man can come to the Father". No other way recognizes the divine justice of God's holiness and yet still saves men! The sinless Son had to be offered. No other offering will suffice. You must be saved this way, or else you will never be saved.

"...have everlasting life." Most of the time, we read quickly over this common expression and think only of the one obvious aspect of eternal life: longevity. Life that does not end. Have we considered its deeper significance? I am referring to the quality and nature of this LIFE eternal. "And this is life eternal, that they might know thee the only true God, and Jesus Christ, whom thou hast sent." (John 17:3) The eternal life that Christ is speaking of here in John 3:16 is the glorious eternal relationship that exists between the Father, the Son and the Holy Spirit which God is calling sinners to be partakers of! This is that Relationship which gives meaning to all other relationships. This is that Life which gives meaning to life! This is that which every person born into the world is searching for because every person born into the world was made for this purpose. "For thou hast made us for thyself and restless is our heart until it comes to rest in thee." (St. Augustine) This, I believe, is the high calling of God in Christ Jesus. To know Him more and more, a knowledge not theoretical, ever-increasing for all eternity. Have you this life? It begins the moment you receive the Lord Jesus Christ by faith.

"...so loved..." The old question is: "Why did Jesus die on the cross?" This can be answered two ways. I could again restate that Jesus died on the cross to satisfy the righteous demands of the law, as payment for crimes committed against the law, so that sinners could be justified and freely given eternal life. That is the right answer... but that is only the doctrinal answer. That is like describing to someone the science of nutrition without actually enjoying the flavor of food. But John 3:16 is speaking for the heart, not for the head.

The answer to question, "Why did Jesus die on the cross?", is answered by John 3:16: because God so loves you. God the Father loves you! God loves you, a sinner, so much... that He gave His only begotten Son to save you from your sins and bring you into an everlasting relationship with Himself. Look upon the crushed body of crucified Savior and marvel: "Behold how he loved!" (John 11:36) This is what John 3:16 is saying, and this is the essential substance of the entire revelation of God. "It's too good to be true!" Yes, it is that good, but it's true. The simple fact remains: God loves you. There is a sinful world perishing in their sins; there is a holy God who loves and values them enough to sacrifice everything to save. It is so impossibly divine as it speaks of a love so utterly unheard of and foreign to the minds and hearts of fallen men. Will you today believe the good news of John 3:16, that "God so loved the world, that He gave His only begotten Son, that whosoever believeth in him should not perish, but have everlasting life"?

Believe the "gospel in miniature" and experience for yourself how God so loved.
Posted by Eli at 11:43 AM 6 comments: