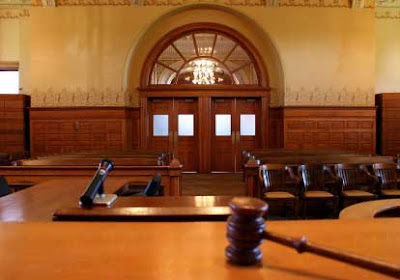 Eli, I was writing a paper in my Mythology class, and I was comparing/contrasting the Christian God with the Greek ones. Now, I wanted to say that God showed his willingness to satisfy the demands of justice and those of mercy in the atonement. Is that an accurate thing to say, or is that a strictly Mormon idea?
This view is presented by the Mormons most candidly in the story of "The Mediator" which I'm sure you're familiar with. God is represented as a loan shark who demands his debtor to pay him back what he owes. The debtor begs God for mercy but the reply goes something like: "No, because then justice wouldn't be satisfied." Jesus is represented as a friend who who has mercy on the debtor and pays God the debt, but then turns around to the thankful friend with these shocking words: "Now you must pay me back. It won't be easy, but it will be possible." And the lesson of the story is, both mercy and justice are "satisfied". Except the story doesn't explain what happens when the debtor can't pay his new debt to Jesus...
One can easily be fooled into thinking that this is the same as the Biblical view of the atonement, but it is definitely not. As we've talked before, it is important to see that it is God the Father who extends mercy to mankind by sending His Son. Christ obeyed the Father by going to the cross. Jesus did not step between man and God as the "good cop", but as the obedient servant of His Father.

It is true that justice demanded satisfaction, but it is not like a loan that needs to be payed back, but an offense that needs to be punished. A loan can be refinanced (which is what the Mormon Jesus does), but a crime cannot. Man has broken God's law, and the law which demands death must be fulfilled. In actuality, that punishment must take place is more about the vindication of God's holiness than a mere legal detail. If God doesn't punish sin, as He said He would, then He becomes a liar and an unrighteous judge. God's character is at stake in judgment (a theme throughout the whole Bible... "Will not the God of all the earth do right?") So when we see it in this light, we see that punishment is inevitable for all of us as true as God is God; but the beautiful thing is this: that God, because of the sacrifice of Christ, is totally satisfied and therefore freely forgives the pleading sinner of all His crimes without ever demanding a payback! "For I will be merciful to their unrighteousness, and their sins and their iniquities will I remember no more." (Hebrews 8:12) Payback would be unthinkable!

Unlike Mormonism, God does not have a necessity to be merciful. There needs no "satisfaction of mercy". However, God, out of the great love which He has for mankind, chose to be merciful in sending His Son, and in this His mercy and grace is truly magnificent in the fact that it was NOT out of necessity but out of love. The cross of Christ, which is what reconciles sinful men to a holy God, is the demonstration of God's pure mercy and love towards the world. That He died for the sins of sinful, undeserving and death-sentenced sinners is what constitutes his love: for men scarcely die for good men, and they might dare to die for their friends and family, but God shows us how different and greater His love is from ours, in that while we were His enemies, Christ died for us (Romans 5:8). So the fact that His mercy is surprising is what makes it so glorious. Grace that isn't surprising isn't grace. If it is born of necessity then it really is just a job.

What is the Gospel?

People need to hear the liberating power of the gospel, which saves sinners and sets them right with God. We do not preach a new thing but the timeless crucified Savior Who will never change, though the world and its trends come and go like the tide.

Rom 1:14 I am debtor both to the Greeks, and to the Barbarians; both to the wise, and to the unwise.
Rom 1:15 So as much as is in me, I am ready to preach the gospel to you that are at Rome also.
Rom 1:16 For I am not ashamed of the gospel of Christ: for it is the power of God unto salvation to every one that believes; to the Jew first, and also to the Greek.
Rom 1:17 For therein is the righteousness of God revealed from faith to faith: as it is written. The just by faith shall live.
Rom 1:18 For the wrath of God is revealed from heaven against all ungodliness and unrighteousness of men."

Paul shows us that the gospel is for all people in every place and for all time. He makes this immense statement: "I am not ashamed of the gospel of Christ: for it is the power of God unto salvation to everyone that believes..."

Question: Why was Paul not ashamed of the gospel?
Answer: Because it is powerful; it is the power of God unto salvation.

The gospel, and it alone, though the world despises and ridicules it, is the only power [force, ability, strength] in heaven and on earth that can save men. If any person, Jew or Gentile, ancient or modern, is to be saved, it must be by the gospel, for there is nothing else in heaven or on earth that is able to save. "There is no other 'detergent' that can remove this kind of stain, and though the world mock the look of it, I'm not ashamed, because this is the only thing that works, and nothing else! You can laugh at it and hate it, but it will cleanse the stain. You can ridicule the gospel, and mock me it's preacher, but I will preach on without shame, because the gospel, and this alone, is the only power in the whole world that can save sinners."

Question: Why is the gospel powerful? Why is it the power of God unto salvation?
Answer: Because in it the righteousness of God is revealed from faith to faith.

Question: Why do people need righteousness?
Answer: Because the wrath of God is against all the unrighteousness of men.

Verse 18 explains the universal need of salvation by righteousness. We do not need saving from a boring life. We do not need saving from drowning in a lake. We do not need saving from emptiness or poverty. What all people, everywhere, in every age, need, is saving from the wrath of God. "For the wrath of God is revealed from heaven against all the unrighteousness and ungodliness of men..." Paul goes on to show that every single person, without any exception, is an offender against God and is justly condemned to die under the righteous wrath of God. God punishes unrighteousness, and all are unrighteous. "There is none righteous, no not one" (Rom. 3:10) "Therefore by the deeds of the law there shall no flesh be justified in his sight." (Rom. 3:20) If this is the case, what then can save them? How can a person be righteous and thereby saved from the wrath of God? Not by our own good works. Not by prayers. Not by penance. There is only one thing that has the power to save sinners! It is the only thing that can make people righteous: the gospel of Jesus Christ! The Lord Jesus Christ died on a cross and paid the price for our sins, condemning unrighteousness in His body, and having risen from the dead, He freely offers righteousness to all who believe. Righteousness is the whole issue of salvation: God is righteous, and a person must be righteous to live in accordance with Him. All unrighteousness is condemned by God, and because all are unrighteous, all are condemned. How then shall man and God be reconciled? Through the gospel of Jesus Christ! By this only can reconciliation be effected. Jesus Christ, the Righteous One, died for our sins and rose from the dead so that all who believe will be declared righteous in the sight of God and possess eternal life. (2 Cor. 5:21, 1 Peter 3:18, 1 John 2:1-2) This is the gospel, and it alone is the power of God to save sinners.

Here lies the simplicity of the gospel, and we must never forget it. The Church needs to shamelessly point men and women to the only place where they can go to be saved from the wrath of God. That is to Jesus Christ and Him crucified. Let us remember that what is needful isn't new doctrines and better programs and ear-tickling prophesies, promising people things God never promised; but only one thing is needful, and that is the declaration of the gospel of Jesus Christ to a world of unrighteousness condemned by God. But I think a further question is necessary at this point:

Question: Why did God even provide the gospel?
Answer: Because God so loved the world.

The gospel reveals to us that God loves sinners, and He loves them so much that He gave His only begotten Son to die for them. If we withhold preaching the gospel to people because we are ashamed of its message, or don't want to offend, or would rather preach something more acceptable and inoffensive, we are actually robbing men and women of the true knowledge of the love of God in Christ Jesus, and robbing God of the glory He is worthy of. We are robbing both men and God by not preaching the gospel. This is why it is so important we first of all understand the gospel, that we might preach it boldly as we ought. Consider what is at stake.

Let us who are Christians, as debtors with the apostle Paul, declare with timeless conviction, for God and man's sake: "I am not ashamed of the gospel of Christ."

If you are not a Christian, the question you must face is:

Question: Will you believe or disbelieve the gospel of Christ that has just been explained to you?
Answer: ...
Posted by Eli at 4:30 PM 2 comments: