James and Paul on Justification: An Introduction It is to be noticed that the only time we see the phrase "faith alone" in the Bible is in the book of James. However, while it is true this is the only place we see the explicit phrase used, it would be nonsense to limit the idea of "faith alone" to this one place. The entire purpose of Romans 3:27, 4:2-6, 9:10-11, 11:6, and Ephesians 2:9, for example, is that salvation is by faith without works: i.e. faith alone.

There is a Protestant saying that has been around for a long time: "We are justified by faith alone, but faith is never alone". This saying explains how faith, not works, justifies us, while pointing to the obvious fact that faith always produces action. If it does not, this shows there is really no faith but only the untrue profession of faith. The action James is drawing our attention to is nothing more than the proof of faith, which, according to James, confirms the account of Genesis, that "Abraham believed God and it was counted unto him for righteousness." This justification took place before Abraham did any work at all, but his faith was later tested and proved to be real by his action.

According to James, why was Abraham justified? Because he believed God (James 2:23). Yet by sacrificing his son Isaac, Abraham proved through this action that he believed God. Notice: he did not prove through his action that he was a good man, but that he believed God. His action, the necessary product of his faith, proved that he had faith in God's promise, that God would do what God said God would do, i.e. make a great nation through Isaac. Abraham proved that he really did believe God and therefore he was justified through faith alone, because his faith was real and was not alone.

Nevertheless, Abraham had faith in God's promise to him, which was given by God to him though he was a sinner, and he proved that he had real faith by his action. The most crucial thing to notice here - and the point that most people fail to notice - is that the action of Abraham which James draws our attention to was not action that showed he was a good person, but action that showed he believed God. Do you see the difference? James is not talking about good deeds that prove you are a good person, but action corresponding to your faith which proves that you believe. No one is good, and by works no one shows that they are good. We can only be justified through faith alone. But by our actions we can show that we believe.

Consider Abraham's faith-proving action which James points to. It was not a good deed. It had nothing to do with the law, nor was it an action that we would consider moral and universally obligatory. Abraham's faith was tested by God when God told him to extinguish the very son that God had promised would be the means of making for Abraham a great nation. God promised Abraham one thing, and then told Abraham to do something that would naturally eliminate all hope of fulfillment! This was a test to see whether Abraham believed God would fulfill His promise, despite all appearances to the contrary. Abraham believed! The Scripture tells us that he went to sacrifice Isaac believing God was able to raise his son from the dead (Heb. 11:17-19). When God saw this, He knew, not that Abraham was a good person, but that Abraham believed. It was not a moral deed which proved his moral worth, but a deed of faith which proved his faith.

James gives us a second example of justification through faith alone where faith is not alone. Who does he point to? None other than Rahab the prostitute! She, James tells us, was justified (James 2:25)! She was not justified (declared righteous) because she proved her righteousness by righteous doing. There is no mention of good deeds here. Rahab was a prostitute, and like everyone else in this world, she was not a good person. But like Abraham, Rahab had faith in God, and she proved that she had faith in God, not by performing any acts of righteousness, but by hiding the Israelite spies. That's all. She hid the spies, proving her faith was real and not an untrue profession, and therefore she was justified. It had nothing to do with being good.

This is where Mormonism, Roman Catholicism, Eastern Orthodoxy and even many Protestants misunderstand James, because they think he is writing about good works rather than about faith-proving action. They think James is saying that we need both faith and moral behavior in order to be justified, or that moral behavior is what proves that we have faith and are righteous. It is because they misunderstand James that they create conflict between him and Paul.

But, as the Scriptures tell us, God "justifies the ungodly", that is, the morally unacceptable, through faith alone (Rom. 4:5). Faith is never alone, for where there is real faith it is always proven by action. The two examples of Abraham and Rahab which James points to show us that this faith-proving action is not law-keeping or good works - not action that proves we are good people - but action that proves we believe. Thus this faith-proving action will be different depending on what our faith is. For Abraham, it was sacrificing Isaac. For Rahab, it was hiding the Israelite spies. For Christians, well, that's a topic for another article. The essential point to see in this article is: James is not talking about proving we are righteous by good works, but about proving we are believers by faith-proving action.

James and Paul have always been in agreement. It is their readers who wrongly pit them against each other.
Posted by Eli at 6:45 PM 5 comments: 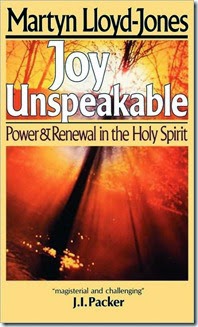 This book is a must read for anyone wanting to seriously study the doctrine of the baptism in the Holy Spirit. If you want a well-rounded view of the subject and want to learn from all sides of the debate, you simply cannot pass by "Joy Unspeakable". Lloyd-Jones is in an unique position to write on this topic since he is one of the most celebrated Reformed preachers of all time. Lloyd-Jones sees himself as defending the "old evangelical" view of the Holy Spirit against the modern view of his day which equated the baptism in the Spirit with regeneration. Whether Lloyd-Jones is correct about this or not is for you to decide.

Lloyd-Jones argues that the baptism in the Spirit is not something one can work up or make happen, but rather that it is a sovereign work of God to happen in His timing and in His way. He emphasizes this greatly. It is not something man initiates, but something God initiates. It is not us doing things to fill ourselves with the Spirit (as in Ephesians 5:18, which Lloyd-Jones calls the normal way), but it is something different. The Spirit "falls on" people, and it is exceptional, an experience they do not make happen.

Throughout the book Lloyd-Jones repeatedly uses examples from history, seeking to prove his points not only from Scripture but from the lives of saints who have claimed a distinct experience with the Spirit. It sometimes struck me that what Lloyd-Jones is calling the baptism in the Spirit is nothing more than when a Christian catches a glimpse of the glory of the truth of the gospel. It is that experience that many of us have had that only seems to last for a brief moment, when you are overwhelmed with emotion due to a more vivid sight of the truth.

Finally, Lloyd-Jones is greatly concerned with the need for revival in the Church. He inseparably connects one's doctrine of the baptism in the Spirit with one's doctrine of revival. If you believe the baptism in the Spirit to be indistinct from conversion, you will therefore not believe in revival. To Lloyd-Jones, the Pentecostal experience is essentially revival, and vice versa. Revival is when God pours His Spirit upon the Church, giving them fresh power to proclaim the gospel.

This book is full of strengths and weaknesses. It is greatly challenging. It hardly deals with spiritual gifts. It constantly asks you to examine your own Christian experience. It doesn't fully satisfy the exegetical questions. However, the best part about Lloyd-Jones is that he actually attempts to prove his position from the Scriptures. He does not just say, as many do, "I can't explain it, you just have to experience it for yourself." Thankfully, Lloyd-Jones gives us more than that.

While I do not fully agree with Lloyd-Jones's conclusions, I consider this book an excellent contribution to the study of the Spirit. Want to wrestle with the doctrine of the baptism in the Spirit? You must at least read this book.
Posted by Eli at 4:42 PM 2 comments: