18 Great Films that Illustrate Truth about Life and God 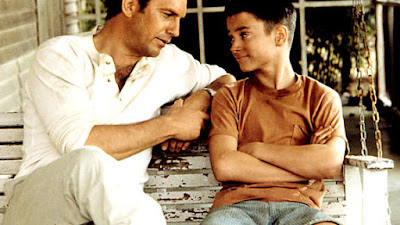 I am often on the lookout for good film recommendations, because I know the power of the medium, and the impact that stories have on our lives. Stories have a way of illustrating truth to us, memorably and imaginatively, in a manner abstract thinking cannot. They, of course, have their limitations, too, and need to be balanced by careful thinking and teaching. If you are a movie watcher, as most of us are today, you already are no doubt aware of the influence the films you've watched have had on your soul.

If you have any good recommends for me, I would love to hear them. Here are some films that I've found particularly noteworthy, and which I regularly commend. These are chosen because they are well-made, thought-provoking, historically interesting, and/or truth-illuminating.


Antwone Fisher (2002)
One of the most powerful films I've ever seen. A true story about a man who found healing from a broken, abusive, and destructive past. It demonstrates humanity's crucial need for community, love, truth, structure, discipline, and companionship. This is a film for everyone, because we are all broken, in need of wholeness.

Good (2008)
A film about how evil triumphs when good men do nothing, or perhaps, how seemingly good people end up doing horrible things, not because they actively pursue evil, but are just too passive and cowardly to go against the grain.

Anne of Green Gables (1985, 1987)
This is one of my all-time favorite films. A TV series based on Lucy Maud Montgomery's bestselling novels, it follows the touching story of a bright and lively orphan who is adopted by an unpretentious, rural pair of elderly siblings in Prince Edward Island, Canada. The story is a celebration of the beauties and joys of life, filled with humor and love, and reminds us that life really is best lived simply, connected to family, home, and friends.

Sophie Scholl: The Final Days (2005)
This German film tells the heroic true story of Sophie Scholl, a Nazi-resistor who was executed at the tender age of 21. Sophie was a Christian, and this film explores her faith in God which motivated her to stand against an evil regime, even at the cost of her own life.

Searching for Bobby Fischer (1993)
This wonderful film, based on a true story, is about the discovery of child chess-prodigy Josh Waitzkin, and the temptations associated with human giftedness and talent. It reminds us all of the ugliness of pride, and that the beauty of art is not worth sacrificing our relationships and compassion for others.

A Simple Plan (1998)
A very sobering exploration of sin, which exists in every heart underneath the veneer of normalcy and decency. A little giving in to sin--something we all do--leads humans into tangled webs of deceit, which in turn makes us to do even worse things we would not have dreamed of to begin with. The film eloquently illustrates the subtlety, ubiquity, and destructive results of sin, helping us reflect on the evil within us all.

The Hiding Place (1975)
Based on the true story of the Ten Boom family who hid Jews in their home during the Nazi occupation of Holland, and who were eventually arrested and sent to concentration camps. The film highlights the deep Christian faith that compelled the Ten Booms to love their Jewish neighbors even to the point of sacrificing their lives for them. I can't watch this film without tearing up. An inspiring true story of faith and love, skillfully acted and directed.

O.J.: Made In America (2016)
This documentary retells the life and times of football superstar O.J. Simpson, who was infamously on trial for the murder of his wife in the 1990s. Dubbed the trial of the century, the entire debacle provides us an important and instructive window into American society, with crucial lessons about race. The film complicates the simplistic narratives about racial strife in America which we often hear. It shows us how seeing everything through the lens of race can actually skew our view of reality and can, ironically, cause the miscarriage of justice.

Poverty, Inc. (2014)
A documentary which explores the negative impact of charitable organizations upon developing nations. Economics is a complicated thing, and although it seems like giving always equals helping, we don't often foresee the unintended consequences of our actions. There are crucial lessons to be learned here about how to love. When we love our neighbors, we must engage both our hearts and our minds.

Captains Courageous (1937)
Don't let the age of this film fool you. This is one of the great films of cinematic history. Based on the novel by Rudyard Kipling, the film tells the story of a spoiled young boy who falls off his father's ocean-liner and is rescued out of the sea by a fisherman. He must spend the next several months on board a fishing boat, and learns about hard work, respecting others, and what it means to be a man. Beautifully filmed and acted, this coming-of-age story is perfect for young and old alike.

The War (1994)
I grew up watching this film, and still love it for its potent and sensitive story. The film follows a poor family in Mississippi whose father, a Vietnam vet, suffers from PTSD which prevents him from holding down a job. An even poorer family, destitute of love, harasses the children, pressing them into conflict and hatred. The story teaches us about the power of grace, forgiveness, and love, and has one of the most powerful scenes demonstrating these that I've ever seen.

The Iron Lady (2011)
A biopic on the life of Margaret Thatcher, the first woman who served as British Prime Minister, who was known for her uncompromising convictions. Covering her rise to prominence and service as Prime Minister, the film does a good job depicting the nature of left and right political perspectives, as well as showing the high personal toll on those in public life.

Leave No Trace (2018)
This thoughtful drama is about a father and daughter who try to live off the grid, out of the sight and influence of society. The reason they do this, however, is because the father tragically suffers from PTSD. The film is a celebration of civilization and society. God created people to live together in society, and this film reminds us of the goodness of that arrangement, and that there's something wrong when we flee it. Nature alone, despite its beauty, is not sufficient for the human soul.

M (1931)
This chilling German film is a thought-provoking look at evil and justice. When a serial killer who targets children terrorizes a city, the police must turn to the criminal underworld to help them stop the culprit. But is sin just a result of poor upbringing and mental derangement, alleviating culpability and making sinners the victims, or is sin truly evil, worthy of punishment? This is the question the film confronts us with.

Flash of Genius (2008)
Based on the true of story of Robert Kearns, the inventor of the intermittent windshield wiper whose invention was stolen by the Ford Motor Company in the 1960s, this film illustrates well humanity's craving for justice, while also making us ponder the limitations of our quest for justice. It helpfully demonstrates that justice is not simply a matter of pecuniary reimbursement, but that real justice involves the restoration of truth and honor.

Darkest Hour (2017)
This is my favorite of the Winston Churchill biopics. Churchill was the man the world needed in its darkest hour, during its crisis with Nazi tyranny, whose adamant convictions, courage, wit, common sense, and eloquence inspired the West to never surrender to evil. The film does a great job showing what he was up against, both from within and without. Churchill was a rare breed who understood that evil exists, and that you cannot compromise with it.

Gifted Hands (2009)
Biopic of Ben Carson, the distinguished neurosurgeon and politician. It follows his life from his humble beginnings, to his becoming a world-respected doctor, to his famous surgery separating conjoined twins. Carson's story is an inspiration, reminding us that through faith, a loving home, hard work, and God's grace, people can overcome obstacles and become blessings to the world.

States of Grace (2005)
This film, by Richard Dutcher, is an exceptional, gut-wrenching exploration of the concept of divine grace. It is actually a Mormon film, made while Dutcher was still a Mormon (he no longer is one), but I don't think that should deter Christians from seeing it. The view of grace which the film offers is not the typical Mormon view I've encountered, but is more of a cry of desperation for the reality of grace sounding from within Mormonism. Dutcher later left Mormonism, and I believe this film portrays part of the struggle he had with his former religion and with legalism. The film follows the lives of several characters, who come to realize in the midst of their failures that what they really need is not more effort on their part, not more rules, not more striving, but the pure grace of God found in Jesus Christ.
Posted by Eli at 6:43 PM No comments: