Is Faith a Work? 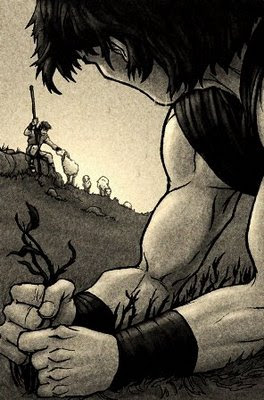 Man is a self-righteous creature. There is something deeply inherent in his innermost being that will not let go of pride, nor admit the truth that he has nothing to offer God; that he is a spiritual pauper. When Cain, the epitome of man, realized that God had rejected the fruit of his labor, which he had sweat for and toiled long for, rather than bowing himself down and confessing his wrong, he lashed out in anger against his righteous brother and killed him. Why? Because he could not bear to see his brother accepted on the basis of faith without works and his own works rejected. Pride flared up with indignation and resentment. In a flash we witness the horrid crime illustrating the conflict of the ages: the self-righteousness of man declared war on the righteousness of God; a war which has not ceased even to this day. God will not allow man's works to be part of justification, and man will not allow them not to be.

It is often objected, when shown that justification by faith without works is taught in the Scriptures, that faith itself is a work. "Isn't faith a work?" "Don't you have to believe, and isn't believing doing something?" "See! I got to do something for my salvation!" It always amazes me how fanatically we as people fight for works in our lust for self-acclaim. We actually hate grace! We hate it because it forces us to accept the reality that we are really undeserving and helpless beings. We are obsessed with ourselves. We are destroying ourselves through our self-infatuation. How foolish we are in not understanding that the grace of God is the only remedy to heal our twisted souls!

The first thing we must do in answering the question, "Is faith a work?", is to define work. The word ergon is the Greek word used throughout the New Testament for the noun "work" (see Ephesians 2:9), and the word ergazomai for the verb "work", as in Romans 4:4-5. They both mean "to toil, to labor, to exert effort." Webster's Dictionary defines work as, "physical or mental effort exerted to do or make something; purposeful activity; labor, toil." The feeling of the word is described perfectly in Genesis 3:17-19: "Cursed is the ground for thy sake; in sorrow shalt thou eat of it all the days of thy life; Thorns also and thistles shall it bring forth to thee; and thou shalt eat the herb of the field; In the sweat of thy face shalt thou eat bread." And also in Genesis 5:29: "And he called his name Noah [Heb: Rest], saying, This same shall comfort us concerning our work and toil of our hands, because of the ground which the LORD hath cursed." When Cain offered his offering unto the Lord, he offered that which he had labored and toiled for; the fruits he offered came from the ground which the Lord had cursed. Work has to do with sweat, effort and exertion, laboring and toiling for compensation and reward. In contradistinction to Cain's offering, Abel's offering did not involve work. In fact, it involved the opposite of work. The Scripture tells us that Abel's offering was an offering of faith (Hebrews 11:4).

The Book of Hebrews gives us the best definition of faith. "Now faith is the assurance of things hoped for, the conviction of things not seen." (Hebrews 11:1) Evangelically speaking, faith is simply the assurance and confidence a person has in Christ. It is a "working not" and a "believing on Him" (Rom. 4:4-5); a total rest from one's own labors and a total resting in the labors of Another. Faith is set in opposition to works: "To him who works not, but believes." It is the opposite of works, for instead of working hard to attain godliness, faith believes the good news of the gospel that God justifies the ungodly. The man of faith says, "I know that I am ungodly and deserve the wrath of God, but I am assured that another has died in my place, and I rest in His finished work on my behalf, and not in my own works or labor." That is faith!

Can confidence in another be rightly called a work? Can assurance in Christ be considered labor worthy of compensation? Of course not!

Let me put it another way. Going on a vacation and going to work are both something a person DOES, but just because each one requires 'doing' doesn't mean they are the same thing; that they are both works. It would be absurd to suggest that going on a vacation is the same as going to work just because you 'do' it. It is the nature of what you do that determines whether it is a work or whether it is a non-work. Going on vacation, or, for a more Biblical analogy, relaxing on the Sabbath, is rest, the opposite of work; just as believing on Christ for salvation is rest, the opposite of working for your own salvation. When a man believes on Christ, he takes a permanent 'vacation' from his own works, and enters into that true Sabbath rest (Hebrews 4:10).

The moment we say faith is a work it actually ceases to be faith (just like the moment we say a vacation is work it ceases to be a vacation!). True saving faith looks not upon itself as work but upon Christ and His work. If faith were a work (something deserving of reward), then would we be saved by works and not by grace, and Jesus Christ and everything He did is made void. We would then deserve salvation due to our faith; but the Scripture states the opposite: "For if they which are of [works] be heirs, faith is made void, and the promise made of none effect." (Romans 4:14) Faith (resting in Christ) becomes void and ceases to be faith if we are saved by works. How is this so? BECAUSE THE GOSPEL IS ALL ABOUT GRACE!: Receiving that which you do not deserve! See, then, how faith fits here: "Therefore it is of faith, that it might be by grace." (Romans 4:16) Salvation is by faith alone that it might be by grace alone; there is not an ounce of work in it! But of course, unregenerate man hates such a prospect, seeing that in such a gospel there is no room for glory.

So let us have faith, but not venerate faith. Let the object of our faith be worshiped and praised. It is Christ and His work that we rest assured of, not our faith. As one godly minister said so well: "True faith is what may be called colorless, like air or water; it is the medium through which the soul sees Christ, and the soul as little rests on it and contemplates it as the eye can see the air."

Where is your assurance of salvation? Is it, like Cain, in your works or even in your faith? Are you "toiling and spinning" in order that you may offer unto God some sacrifice worthy of eternal life? Are you clinging to your dead works, waging war against the righteousness of God? Or are you, as Abel, resting confidently in the work of the Substitute? Only the faith which actually ceases from self-works and self-effort and reposes fully upon the sacrifice of the slain Lamb of God, believing on Him who justifies the ungodly, is accepted and counted for righteousness.

Live video by Ustream
SCHEDULE
(All times are EST)