The Law of God 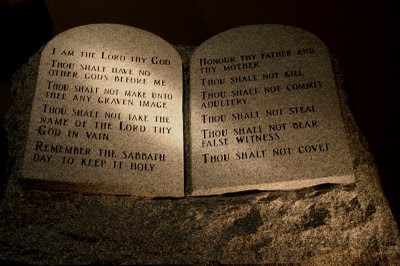 Eli, I was reading Galatians and Paul keeps on referring to "the law." Mormons believe that this is just the law of Moses (as opposed the the "higher" law of Christ), but you believe that it's referring to all commandments and works in general. What brought you to your conclusion, and is there any basis for the Mormon viewpoint? As always, I appreciate your thoughts.
Hi Mike, that is an excellent question.

That's great that your reading Galatians. Galatians and Romans go hand in hand in that Romans lays out the gospel and Galatians defends the gospel against false teachings that were creeping in to the churches. Paul uses much of the same language and concepts in both letters, so Romans helps shed much light on the meanings of words in Galatians. Having said that, you can still understand what Paul is saying in Galatians without going to Romans; though it's extremely helpful to read it with that accompaniment. God's inspired word is consistent, and that goes back to an old hermeneutical principle: Scripture interprets Scripture.

The main problem with the Mormon view is that they don't even understand what "the law of Moses" is when they talk about it. If they did, they would never say the things they do. What then is the law of Moses? The law of Moses refers to all the statutes and commandments God gave Israel to obey. These include both moral and ceremonial aspects; the ceremonial aspect necessitated BY the moral aspect (i.e. the sacrificial system was given because of the inevitable moral failings of the people, and thus it was added subsequent to the moral commands and is included as part of the definition of the law). When the Bible refers to the law, it primarily emphasizes the moral aspect, for that is the first and main point of the law; the ceremonial aspect being secondary as it was given to meet man's failure of keeping the moral commands.

Mormons miss this: that the law of Moses contains two incredible commands which Jesus said were the summation of all the commandments of God: 1) Love the Lord your God with all your heart, with all your soul, with all your mind, and with all your strength, and 2) Love your neighbor as yourself. You can find these two commands in Deuteronomy 6:5 and Leviticus 19:18... Moses' law! (When we say "Moses' law" we mean the law God gave through Moses, so it is really GOD'S law, not Moses'; and because it is God's, it is perfect and cannot be replaced.) The thing to see is this: you cannot add or improve to those two commands to make them any better. It's impossible. You cannot have a "higher" law than this. Even the New Testament teaches that love is the fulfilling of every possible command. "For this, Thou shalt not commit adultery, Thou shalt not kill, Thou shalt not steal, Thou shalt not bear false witness, Thou shalt not covet; AND IF THERE BE ANY OTHER COMMANDMENT, it is briefly comprehended in this saying, namely, Thou shalt love thy neighbor as thyself." (Romans 13:9, see also Galatians 5:14; James 2:8-11). Listen carefully to the words of Jesus:

There is NONE OTHER COMMANDMENT GREATER (or "higher") THAN THESE... and they are both from the law of Moses! Jesus did not come to bring a higher law than the law of Moses; that is not only impossible, but it is contrary to Jesus' own words. All of Christ's moral teachings were an exposition or explanation of the law... the law that isn't just words on stone, but the real and living heartbeat of the holiness of God.

The next thing to see, after defining what the law is, is to define what the purpose of the law is. It is explicitly stated in the New Testament, and though it's not explicitly stated in the Old Testament, the implicit message is loud and clear. The Old Testament teaches us of man's total and utter failure to keep the law of God; it leaves us at a desperate and hopeless intermission. We observe the futility of men attempting to be saved by obedience to God's commandments. We see the righteous justice of God in condemning sinners to eternal destruction because of their evil deeds. However, though we SEE no resolution in the Old Testament, we HEAR of a resolution that is to come by the words of the inspired prophets of God. Amazingly, there is much that is spoken in the Old Testament about the salvation of men through the righteousness of God alone (see for example Isaiah 53:11, 54:17, Jeremiah 23:6)! That is why Paul wrote: "...the gospel of God, which He had promised before by his prophets in the holy Scriptures..." (Rom. 1:2) I agree completely... in fact, the foundation of my understanding of justification by the imputed righteousness of Christ comes primarily from the Old Testament Scriptures, though it be clearly expounded and illuminated by the New Testament writers.

"But this I confess unto thee, that after the way which they call heresy, so worship I the God of my fathers, believing all things which are written in the law and in the prophets. " (Acts 24:14)

So what is the purpose of the law? The New Testament helps us see: "Wherefore the law was our schoolmaster to bring us unto Christ, that we might be justified by faith." (Galatians 3:24) Literally, the law was our "παιδαγωγος", which means "instructor", (an interesting play on words by Paul, for the Hebrew word "Torah" means "instruction") that we might be JUSTIFIED BY FAITH. The law taught us that we could not be justified by works, but that we had to trust in Christ alone to be saved.

So when Paul speaks of the law in both Romans and Galatians he speaks about the only law there is, the law of God, and he is emphasizing the moral aspect of the law to get a point across. You'll notice the controversy in Galatians regarded a false teaching that purported that Christians needed to be circumcised to be saved. Paul warns: "You can't split the law up and pick and choose what you want to obey. You can't modify it! I testify to every man that is circumcised, THAT HE IS A DEBTOR TO KEEP THE WHOLE LAW! (Gal. 5:3)" So although the subject that necessitated Paul to write was circumcision, to say that Paul was only talking about the ceremonial law defeats his whole argument and the urgency of his letter! "If anyone preaches another gospel let him be accursed." (1:9) "I do not frustrate the grace of God: for if righteousness comes by the law, then Christ is dead in vain." (2:21) "Christ is become of no effect unto you, whosoever of you is justified by law; you are fallen from grace." (5:4) You cannot be saved, because you bring yourself under the obligation to keep the whole law of God, something you as a sinner can never do, and so you stand condemned before the judgment bar of God. Believing in Christ loses all meaning if you have to keep the commandments to be saved! This is an incredibly strong message we dare not confuse, miss, or play down.

Read Romans 2:21-25 for more on this, because there Paul says the same exact thing. He writes that "circumcision truly profits you, IF YOU KEEP THE LAW." Notice the differentiation. Keeping the law here isn't talking about circumcision per se (the ceremonial aspect), but the moral aspect (compare with verses 21-23). Here is what he is saying: circumcising yourself (or any other commandment for that matter) will profit you only if you keep the whole law, but if you don't keep the law, your circumcision profits you nothing. You either obey the law or you don't. You're either innocent or you're guilty. It's either all or it's nothing. That's how the law works:

"For Moses describes the righteousness which is of the law, That the man which DOETH those things shall live by them." (Romans 10:5)

"For as many as are of the works of the law are under the curse: for it is written, Cursed is every one that CONTINUES not in ALL THINGS which are written in the book of the law to DO them." (Galatians 3:10)

"For not the hearers of the law are just before God, but the DOERS of the law shall be justified." (Romans 2:13)

"For whosoever shall keep the whole law, and yet offend in one point, he is guilty of all. For he that said, Do not commit adultery, said also, Do not kill. Now if thou commit no adultery, yet if thou kill, thou art become a transgressor of the law." (James 2:10-11)

I wrote an article on the usage of the word "law" in the book of Romans which shows that every time Paul uses the word "law" in Romans he is referring to the moral aspect of the law. You should definitely read it as it is pertinent to your question. It' s called "Evidence that 'the Law' Includes the Moral Law" and you can find it here. Of course, what Paul says in Romans spills over into the book of Galatians.

The end of the matter is this: There is only one law, and that law is God's law, which is the dictation of His own holy character. It cannot be improved upon or added to, and it demands of all men perfect uninterrupted obedience; an obedience which no man gives because of sin. Therefore all will be justly punished in hell if they attempt to be justified by their own works. Jesus Christ came into the world to save us from the curse of the law by becoming a curse for us on the cross (Galatians 3:13), so that whoever believes in Him is counted righteous in God's sight on the basis of grace. Salvation is free, is entirely apart from the works of the law, and allows no room for boasting. It is in the gospel alone that the great love of God for wretched sinners is manifested.

I hope this was helpful for you in understanding Paul in his letter to the Galatians. Keep pressing on in your studies, Mike, and I pray earnestly that one day soon you will enter the rest of faith, acknowledging the fact that you need salvation, and rejoicing in Christ who alone can give it.