Human Government vs. The Kingdom of God 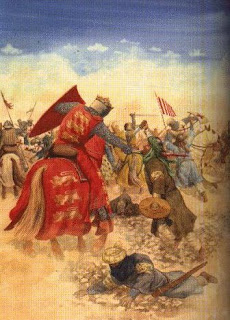 The following was written in response to a question asked me concerning the current U.S. election and a comment Hillary Clinton made about Iran and Israel.
I can't remember if we talked politics or not when you were in Logan, but, as Christians, our relationship with human government is casual at best. We belong to the kingdom Jesus spoke of to Pontius Pilate in John 18:36. I am neither a republican nor democrat. Men were never designed to exist independent of the sovereignty of God, and the history of our attempt consistently proves disastrous. The only form of government I come under is Theocracy, with Christ as King, and I believe that one day, according to Scripture, the whole world will come under His divine authority. However, in the mean time, Christians are exhorted to respect and obey the present human governments, understanding their place and role, so far as they do not interfere with the believers conscience. Almost always they do, hence the bloody martyr's story. Human governments that attempt to exist as the Kingdom of God on earth (such as the Holy Roman Empire; Crusaders; even 'Christian America') are unscriptural and not in accordance with Christ's statement, "Now is my kingdom not of this world... if it were, my followers would fight for me." So we have to be careful to distinguish between true Christianity and the christianity that is so often projected today.

So my view on the election, and Hillary's comment, is that I see sinners trying to lead sinners for the sake of power and it is sheer corruption and blindness. God alone is the rightful King of all men, and until this world learns that we'll find ourselves again treading the oft repeated course of disaster.

Concerning Israel, they, by God, were established as a Theocratic nation, and if you know their history Israel rejected God and met with defeat and exile time and time again. Was this a mistake by God? No! God knew this would happen; it was for His eternal purposes and in His wisdom to do this, to declare to all mankind the sinfulness of men, as demonstrated by Israel, and the incapability for men to submit, obey, even love God. The revelation of Jesus Christ follows the acknowledgment of this vile condition. Christ brings life to the dead, healing to the wounded, and grace to the sinners. The future Theocratic government that will reign "from sea to sea", replacing the crooked kingdoms of men, can only work and be established through the power of the cross; the Gospel of God. Only the cross can change a man to love his neighbor, walk humbly, love justice and bow the knee to God, so that the glory of the Kingdom of God does not come from man, but from God.

Well, that's why I have no confidence in earthly governments. How can men govern the world when we can't even govern ourselves?
Your friend,
-Eli
Posted by Eli at 12:33 AM 4 comments:

Short Meditations on Faith, Repentance and the Will

These thoughts were written as a response to a question that was asked to me concerning faith, repentance and will in the role of salvation.
This is what I've always thought too, until I started probing deeper into the nature of those words "faith" and "repentance".

The first thing I saw (and I believe God was showing me) was that repentance was not just another word for 'keep the law', which most people, without realizing it, use it that way. What do you mean when you say "repent"? A common response is that it means to turn from sin and turn to God. What does that mean? What is the definition of sin? "Sin is the transgression of the law." (1 John 3:4) So turn from transgressing the law? How comprehensive are we talking about?

Do we mean turn from outward sins only or are we also speaking of inward sins and inward defilements? How much sin do we have to turn from, some or all? Is it just a desire to stop sinning, or is it actually stopping? According the Bible, if a person doesn't continue keeping all the law he is under a curse (Galatians 3:10). It would seem then that to stop transgressing the law, you would have to turn from all sin. That means no more sinning, inwardly or outwardly, ever; and that's not just talking about the "thou shalt not's" but also the "thou shalt's". So if repentance means to turn from sin and turn to God, that's pretty comprehensive, and is no different in any way from being under the law and living by the principle of works: "if you stop sinning, you'll live". That didn't sound like the gospel to me.

For the first time I began to see that God was holy... REALLY holy, and the reason the standard of the law was so high was because God's law was requiring me to "be holy as God is holy", and that is altogether too much for any man on His own. All truly have sinned and fall short of the glory of God. A person isn't holy just because he stopped lusting or swearing. A person isn't holy even if he ceased from anger or self-pity. In fact, the law has a way of making so-called "righteous" men even more proud! And so ironically, the more you 'stop sinning', the worse you get, because of the wicked heart of pride. Holiness is not something you do but is something you are. As long as we are still trying to 'do' holiness we are getting worse, as Israel did. The cross is the only remedy. Cross-less holiness is disastrous.

Repentance, then, cannot mean what many think it to mean. I have learned that the word 'repentance', in its purest sense, has nothing to do with sin! just like the word 'turn' has nothing to do with sin either, unless '...from sin' is coupled onto it. In the Bible, God repents. That doesn't mean God repented of sin! What is the repentance about is the question in point. Repentance, by itself, doesn't make sense unless we know the object it is being connected to.

I also used to think the same way about faith, until God started giving me a deeper understanding of the nature of faith. I saw that, contrary to what I used to believe, faith was not 'square one' so to speak; it is not the 'first thing', according to Romans 10:17, "So then faith cometh by hearing, and hearing by the word of God." Before faith, there must be a hearing of the word of God. That hearing, which predicates faith, is a supernatural work of God. It is the kind of hearing that Jesus spoke of when He said, "He who has ears let him hear." It is a spiritual hearing (and seeing), and the opposite is spiritual deafness (and blindness).

This is why the majority of the Jewish nation could not believe in Christ, because they could not see or hear. "But though he had done so many miracles before them, yet they believed not on him: That the saying of Isaiah the prophet might be fulfilled, which he spake, Lord, who hath believed our report? and to whom hath the arm of the Lord been revealed? Therefore they could not believe, because that Isaiah said again, He hath blinded their eyes, and hardened their heart; that they should not see with their eyes, nor understand with their heart, and be converted, and I should heal them." (John 12:37-40)

The reason why a person believes is because God first opens their eyes and ears to see and hear! "Faith cometh by hearing." There are numerous accounts in Scripture to confirm this; for one, consider Lydia in Acts 16:14, "And a certain woman named Lydia, a seller of purple, of the city of Thyatira, which worshipped God, heard us: whose heart the Lord opened, that she attended unto the things which were spoken of Paul." Neither does a Christian necessarily need to understand this for it to happen. Many who believe in Christ are clueless to the fact that God had first opened their eyes.

I've now come to see that faith, as the Scripture says, is the gift of God (Ephesians 2:8). It is the lack of understanding this truth, however, that many are "wise in their own conceits", because they have not properly understood that their "standing" is God's gift, and have boasted in their own ability to believe!

"Boast not against the branches... because of unbelief they were broken off, and thou standest by faith. Be not highminded, but fear: For if God spared not the natural branches, take heed lest he also spare not thee." (Romans 11:18, 20-21)

There is a humility that comes with faith, because, as John Newton said so well, "Amazing grace... I once was blind, but now I see." Faith is the gift of God, and without the supernatural illuminating of the Spirit of God in our hearts, we could never believe God, nor receive that divine righteousness which comes through Abrahamic faith in Christ. It takes God for this kind of believing!
As for the will, I absolutely agree that the will must desire to be changed. The problem is, as you know, the will alone is not sufficient to produce such a change. I may full well want to obey the law, but "that which I do I allow not: for what I would, that do I not; but what I hate, that do I."(Romans 7:15) I may want to follow Christ, but the will alone cannot follow: "Peter said unto him, Lord, why cannot I follow thee now? I will lay down my life for thy sake." (John 13:37)

Men must come to see that they have no sufficiency in themselves to love, serve, believe or obey God. No confidence in the flesh. One person put it this way: "It takes God to love God!" That is so true. Our will, as well meaning as it can be, should bring us to the place where we cry out, "Oh wretched man that I am! Who shall deliver me from this body of death?" I believe that it is when God sees the work of His law penetrate this deep into the individual, He responds by revealing Christ to the heart. "Wherefore the law was our schoolmaster to bring us unto Christ, that we might be justified by faith." (Galatians 3:24)
Love in Christ,
-Eli
Posted by Eli at 2:40 PM 8 comments: