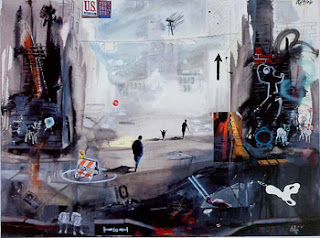 Today our culture prides itself that it is pluralistic, relativistic and tolerant - that it has cast off the ancient ways of exclusivity, absolutism and intolerance. But is this approach to life really all that it is chalked up to be? Is it truly beneficial? Is it something we should be proud of? The answer to these questions must be a resounding "no".

Pluralism is "the concept that two or more religions with mutually exclusive truth claims are equally valid. This posture often emphasizes religion's common aspects." (Wikipedia) To say that two or more religions with mutually exclusive truth claims are equally vaild, is the same thing as saying that truth isn't real or that truth doesn't matter. In reality, if two claims are mutally exclusive, then it means that to hold to one is ipso facto also to reject the other. For example, if I say that there is only one God, it also means that I am saying that the belief in many gods is false. If I say that Jesus died upon a cross, I am also saying that the belief that Jesus did not die is false. This is the basics of the nature of truth, and any attempt to deny this is self-refuting. If someone objects by saying, "I don't believe that", we might as well just shake their hand and congratulate them for believing it. By saying that they don't believe it, they are using the very principles of truth which they are claiming to deny.

The second part of the definition of pluralism is significant. Pluralism, by ignoring and setting aside truth as non-important, then seeks to emphasize religion's common aspects. Forget about the fact that the claims of Judaism, Hinduism, Islam and Christianity are mutually exclusive - rather, what do they have in common? There are two major things these religions have in common. One, they each acknowledge the beauty and power of the divine in creation, and two, they each believe that kindness is a virtue. Voila! A new synthesized religion is born: theistic moralism. "All religions are just worshipping the same unknown God and the point of them all is to be a good person! This will be our religion." Thus, pluralism is just a new religion inconspicuously forcing itself upon the others until it alone remains. This pluralistic ideology has infiltrated our culture to the degree that it is hardly ever questioned; but the truth is, it is unreal, unJewish, unHindu, unIslamic and unChristian. It is actually saying, "All these religions are wrong, and mine is right." So while it claims to be inclusive, it is actually exclusive, hypocritical and self-refuting; but of course it must be, for any attempt to deny the basic principles of truth always turns out to be self-defeating. You cannot do away with truth, but truth will do away with you.

The second thing that our culture prides itself in is relativism. Relativism is "the concept that points of view have no absolute truth or validity, having only relative, subjective value according to differences in perception and consideration." (Wikipedia) Once again, we seem to love the prospect of becoming incoherent. It would seem that truth is an uncomfortable obstacle in our pursuit of happiness. While pluralism denies absolute truth by simply ignoring it, relativism seeks to deny it by appealing to the fact that certain claims may be true or false depending on the perception of the viewer. This is actually a true fact. If we say, "Gerald is very good at playing the piano", it is only a true statement depending on what you are comparing Gerald to. Compared to the five year old who is just starting to plunk around on the black and white keys, Gerald is indeed very good at playing the piano (we would much rather hear him play than the five year old). However, compared to the professional concert pianist who makes his living by playing the piano day and night, Gerald is not really that good at playing the piano (we would much rather hear him play than Gerald). So the claim is relative depending on your point of view.

The problem here is not that relativism is untrue, but that our culture takes relativism too far. It is being conveniently ignored that the principle of relativism is only applicable to the nature of certain kind of claims, but not to others. If we observe Gerald playing the piano and exclaim, "Gerald is a very good trumpet player", we have made an incorrect statement and relativism has nothing to do with it. Gerald doesn't play the trumpet, he plays the piano, and we have made an error.

The idea of total relativism is an attempt by our culture to eliminate the reality of absolute truth. It is not uncommon to hear a person say these days, "There is no absolute truth!" The obvious question to ask them is, "Is that absolutely true?" Why is it that we don't want absolute truth to exist? Is it because if truth exists, then we are obligated to conform to it? We are accountable to it. We cannot be the gods of our own reality. The Christian would add to these another reason: because of what the truth is - there is a just God in heaven who makes Himself known. This makes sinners uncomfortable. Thus they seek to ignore or deny the reality of truth. Yet as we have already seen, any attempt to deny the reality of truth always turns out to be self-defeating. You cannot hide from reality. "It is hard for you to kick against the goads." (Acts 9:5)

However, it is not these that our culture is referring to when it boasts about its tolerance. What our culture refers to is its inability to believe that someone else is wrong in what they believe. It is a tolerance which allows for ideas that are mutually exclusive to dwell together in unmolested harmony. In short, the intelligence of our culture is to be tolerant of unintelligibility. This is not only disastrous to reality, but has other very serious consequences.

The consequence of being intellectually tolerant is that you become behaviorly intolerant. The most behaviorly intolerant people in society are those who are committed to intellectual non-commitment. As long as you agree with them that there is nothing to be agreed upon, there is peace; but disagree with them, and take a different stand for what you believe, and you will discover just how tolerant tolerance is. Our culture has a startling incapacity to endure with those who disagree with them about absolute truth. It doesn't bother them if you believe differently than they do on this or that, but you must agree with them on this: that your way is not the only way. This is the philosophy of Friedrich Nietzsche who said, "You have your way. I have my way. As for the right way, the correct way, and the only way, it doesn’t exist." Of course, Nietzsche's way of approaching the ways is the only right way. Anyone who takes another way than this is wrong.

The irony of the situation is that while Christians possess an intellectual intolerance (that is, in the mental sphere they hold to exclusive absolute truth and are not intellectually tolerant of untruth), their beliefs cause them to be behaviorly tolerant. A Christian may have the audacity to tell a non-Christian that he is wrong, but he will do so with graciousness, and will not ridicule nor persecute him for believing otherwise. Evangelism is an enterprise of compassion: a battle for the well-being of souls fought vigorously in the intellectual sphere, but fought to save and not to condemn. For the Christian, to tell someone that they are wrong and to point them in the direction of Jesus Christ, the way, the truth and the life, is a courageous act of love, not of bigotry. On the contrary, the culture that demands that men keep their mouths shut because it says they have nothing to say, and ridicules and persecutes anyone who dares to challenge its philosophy, is in fact the true culprit of bigotry.

"But", it is objected, "doesn't absolute truth divide and separate people?" The answer is, that it is pluralism, relativism and intellectual tolerance that actually divides and separates people, and it is only absolute truth that brings people together. It is Nietzsche's existential approach to life, which says that there is no ultimate reality, and that each person merely creates their own reality, and must not impinge upon the reality of others, that isolates and fragments us from one another, pushing us apart to live in our own individualistic little universes. It is no wonder that our society today is so relationally detached and disfunctional. It is because we have no common reference point to interact with one another and are not permitted to have one. We are told that we don't live in the same universe.

In Genesis chapter one, when God created the universe and everything that is in it, the very first thing that He did was to divide the light from the darkness. "And God divided the light from the darkness, and God called the light Day, and the darkness He called Night." (Gen. 1:4-5) Thus we see that right from the beginning, in the will and act of God, division is a good thing. Exclusivity is a good thing. Intellectual intolerance is a good thing. Light is light and darkness is darkness, and it is only by distinguishing what is and what isn't, between what is true and what is false, that are we able to live in the universe that God has created. The basic principles of truth give us the God-given reference point to interact with one another in a real way, so that as a Christian, I know who I am, and I know who you are even if you disagree with me, - we live in the same universe, and because there is such a thing as absolute truth, I can interact with you and love you as a creation of God. So interestingly enough, it actually requires a division (the ability to distinguish between this and that) in order to bring us together.

No, pluralism, relativism and intellectual tolerance are not virtues that our culture should be bragging about. They have caused us to become self-defeated, incoherent and behaviorly intolerant. They have driven us apart rather than brought us together. The sooner we recognize what a lie we have been fed by the devil himself, and return to the basic nature of truth, coherence and God, the better - for then we shall be wiser, happier, and closer to reality than we currently are as a society.
Posted by Eli at 4:23 PM 3 comments: