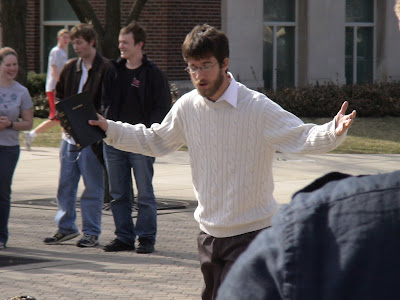 "But we preach Christ crucified, unto the Jews a stumblingblock, and unto the Greeks foolishness; But unto them which are called, both Jews and Greeks, Christ the power of God, and the wisdom of God." (1 Corinthians 1:23-24)
One of the great obstacles in preaching the Gospel to university students are the intellectual strongholds that have seized their minds due to the heavily atheistic and antichrist education that they are receiving in the classrooms. The plain truth of Christ is muddled and becomes a stumbling block to the enslaved mind. Paul warns in Colossians 2:8, "Beware lest any man spoil you through philosophy and vain deceit, after the tradition of men, after the rudiments of the world, and not after Christ." Where there is an increase of evil there must also be an increase of prayer; and as we read and learn of the preaching of the apostle Paul when he confronted these challenges, there must also be a reasonable presentation of Biblical truths in order to counter vain imaginations and bring restoration to the corrupted mind.

"And he went into the synagogue, and spake boldly for the space of three months, disputing and persuading the things concerning the kingdom of God. But when divers were hardened, and believed not, but spake evil of that way before the multitude, he departed from them, and separated the disciples, disputing daily in the school of one Tyrannus." (Acts 19:8-9)

"And as he reasoned of righteousness, temperance, and judgment to come, Felix trembled..." (Acts 24:25) 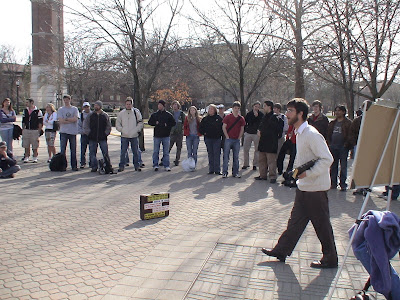 Our time spent at Purdue University, Indiana, was just that. Jude called it, "Earnestly contending for the faith once delivered to the saints", and Peter said, "Be always ready to give an answer to every man that asks you for a reason of the hope that is within you." In our generation, Christianity is under incredible assault from the ruler of this world. Modern culture permeates with Satanic influences while truth lies fallen in society. I believe this is because we are drawing nearer and nearer to the end of the age when Jesus will return to the earth in great power and glory. As that day approaches, evil will come in like a flood; sorrows will grow greater in intensity, and deception with cause many to fall. We need men and women with the kind of valor that Gideon had to rise up and proclaim boldly the Gospel of salvation and everlasting truth to a dark and dying world.

Jesus said, "I am the way, the truth, and the life: no man cometh unto the Father, but by me." (John 14:6) All attempts to dethrone Christ are absolutely futile; I have seen it again and again. Of all the campuses we've been on I have never heard a reasonable argument against the Lord of lords and King of kings... men seek only to serve themselves and their sin. They justify their deeds by suppressing truth... they cannot run from the inescapable knowledge of God! "Where is the wise? Where is the scribe? Where is the disputer of this world? Hath not God made foolish the wisdom of this world?"

Here is a video from Purdue University:


We stayed at Purdue for only one day. After the meeting was over, a Christian brother was so excited about what we were doing that he asked us to come to a gathering that evening and share about apologetics, open air preaching and Biblical evangelism. It was a wonderful time spent with them. Many of the believers had never known how to defend their faith against the waves of secular opposition. It was refreshing for them and for us to see their faith strengthened.

Dear saints, we serve the Living God; we serve the risen Lord! I challenge you to be bold in your witness and stand up for Jesus within our godless societies. "Ye are the light of the world. A city that is set on a hill cannot be hid." (Matthew 5:14) Never let fear hold you back from confessing Christ before men. Never let timidity rob you of your honor to be Christ's ambassadors here on earth. God is for us, who can be against us? Stand up for Truth and watch God do mighty exploits through you unto the praise and glory of His Name. 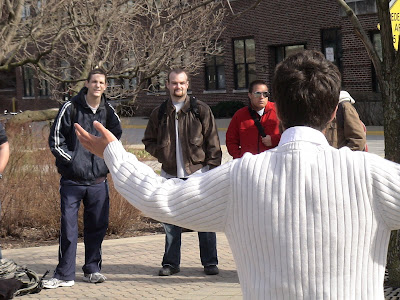