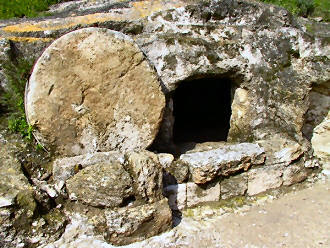 "Who was delivered for our offenses, and was raised again for our justification." - Romans 4:25

For any devout student of the Word of God, the most intriguing, mysterious and powerful of all truth that is found in the whole of Scripture surrounds the death, burial and resurrection of our Lord Jesus Christ. The Gospel itself is primarily comprised of these three things, and they, the climax of Christ's ministry as foretold by the Law and the prophets, are what constitute in Christ the power of God unto salvation. It is unfortunate how shallow an understanding so many Christians possess concerning these blessed essentials, and how much richer will our life in Christ be as we begin to apprehend these divine mysteries, growing "in grace, and in the knowledge of our Lord and Saviour Jesus Christ." (2 Peter 3:18)

What then is the significance of resurrection, and why does the Bible give such strong emphasis upon this? I believe the answer to the whole question is found in our text, Romans 4:25, "Who was delivered for our offenses, and was raised again for our justification."

The King James Version, as well as several other modern translations, has caused this Scripture to be frequently misunderstood. Many have thought that what the verse is trying to say is that Jesus' resurrection ACQUIRED our justification, since the wording states he was "raised again FOR our justification." However, this interpretation simply will not do, and there are two main reasons why it cannot: First, no where in the Bible is it taught that Christ's resurrection purchased our justification, as we shall examine further. Secondly, such an interpretation is inconsistent with the original Biblical language.

The Word of God teaches us precisely how we are justified. If we look forward to the very next chapter in Romans, we shall find Paul making this very important statement: "Much more then, being now justified by His blood, we shall be saved from wrath through Him. For, if, when we were enemies, we were reconciled to God by the death of His Son, much more, being reconciled, we shall be saved by His life." (Romans 5:9-10) If we look backwards a chapter in the Book of Romans, we read one the most conclusive Gospel verses in the whole of Scripture: "Being justified freely by his grace through the redemption that is in Christ Jesus: Whom God hath set forth to be a propitiation through faith in his blood." (Romans 3:24-25)

It is not possible that Paul would contradict himself in the fourth chapter by saying we are justified by the resurrection of Christ, thereby nullifying the great Christian truths he spent so much care meticulously setting forth. That we are justified through the death of Jesus Christ on the cross, by His vicarious sacrifice and atoning blood, is non-negotiable. It is by the shedding of blood that sin is remitted, or how else could it be forgiven? Had Christ taken our sins to the grave, how could He have loosed Himself from them therein? Therefore, to misinterpret Romans 4:25 is to miss what the beloved Apostle is truly trying to express regarding justification and the resurrection of our Lord.

But to fully confirm this distinction, the true language of the text gives us aid. That the injunction "for" is not meant to be interpreted as Christ obtaining something the first part of this verse proves: "Who was delivered for our offenses, and was raised again for our justification." Seeing that the same Greek word, dia, is used in both cases, can we apply the same interpretation to the first part, "Who was delivered for [to obtain] our offenses?" Absolutely not, for Christ did not go to the cross to buy our sins but to pay for them! In fact, as the correct translation of the word dia shows, Christ was delivered up to death BECAUSE of our offenses. "But he was wounded for [because] our transgressions, he was bruised for [because] our iniquities..." (Isaiah 53:5) The correct translation of Romans 4:25, as the NASB and all other literal Bibles have correctly translated, is: "Who was delivered because [in consequence of] our offenses, and was raised again because [in consequence of] our justification." This is the correct understanding and it makes all the difference.

If Jesus Christ had not resurrected three days after they laid Him in the tomb, it would have shown that He was not Messiah and that His death on the cross was meaningless. That is why the disciples, during those three dark days, were so depressed. "But we had hoped that he was the one who was going to redeem Israel. And what is more, it is the third day since all this took place." (Luke 24:21, NIV) This is why Paul said that if Christ had not been raised we would still be in our sins... because it would have proved that the cross had been powerless to atone for sin! But oh, it is not so! The preaching of the cross is in fact the power of God unto salvation for all who will believe! For Christ indeed died, and is risen, and therefore we have assurance before God that redemption is truly found in the death of the Lord Jesus Christ, "Whom God hath set forth to be a propitiation through faith in his blood" (Romans 3:25), and "he is able also to save them to the uttermost that come unto God by him, seeing he ever liveth to make intercession for them." (Hebrews 7:25) The resurrection proved the death of Christ victorious! Hallelujah to the Lamb of God!

In closing, I must now mention once again the inseparable relationship that exists between Christ's resurrection and our own future resurrection. Because Jesus died for us, we are justified in God's sight, and because we are justified, just as Christ rose from the dead, "for it was not possible that he should be holden of it" (Acts 2:24), so to shall we be risen from the dead as proof that we are the redeemed children of God, free from the law of sin and death. And just like Christ's resurrection, our resurrection will prove the death of Christ victorious to the ultimate end of the glory of God. It is to this end that all creation groans, waiting for the manifestation of the sons of God, when the creature itself "shall be delivered from the bondage of corruption into the glorious liberty of the children of God." (Romans 8:21) Praise be to God!


"For this corruptible must put on incorruption, and this mortal must put on immortality.
So when this corruptible shall have put on incorruption, and this mortal shall have put on immortality, then shall be brought to pass the saying that is written, Death is swallowed up in victory.
O death, where is thy sting? O grave, where is thy victory?
The sting of death is sin; and the strength of sin is the law.
But thanks be to God, which giveth us the victory through our Lord Jesus Christ." (1 Corinthians 15:53-57)
Posted by Eli at 6:18 PM

Brother Eli:
I hope all is well with you in BC. Thank you for this post; you handled the word well. If you get a chance, write me and fill me in on your plans for the near future. Last time we spoke you weren't sure what you were doing this fall. I hope things are clearer now for you. Take care.
Your Brother,
Ryan

Hi Eli
A well written article showing clearly the importance of the "blood of Jesus", shed on Calvary for our redemption!
Blessings.
Gramp