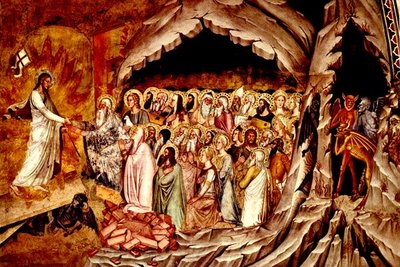 It was great to hear from you, and thanks for the good question. These passages don't yield their meaning so easily, and thus Bible readers have long wrestled with them. This means we must proceed without haste and with caution, remembering always that basic interpretive principle, that what is unclear must ever be understood in the light of what is clear.

We might wish that Peter had said more, but his very brevity actually holds the clue to its meaning. Peter's speech reveals that he expects his readers to know what he's talking about. He doesn't appear to be sharing a new thing with them for the first time, but is simply pointing their attention to things they already know. This means either that the background to these texts is already in the Bible somewhere, or that it is in their culture. If today we are slow in getting the point, it's because we either don't sufficiently see what is in the Bible, or we don't share the cultural context of those 1st century readers. Possibly both.

So let's not approach this passage as if Peter, like Joseph Smith, were sharing with them some "new revelation" about heavenly mysteries. Peter is appealing to a common and shared pool of knowledge. There's nothing esoteric here.

Let's begin with 3:18. "For Christ also died for sins once for all, the just for the unjust, so that He might bring us to God, having been put to death in the flesh, but made alive in the spirit". There's nothing difficult about this verse, as Peter is simply stating something all Christians know, including us today. Christ died for our sins to accomplish our salvation, and rose from the dead. It's possible that this verse is an early Christian hymn, which would confirm the fact of it being public knowledge. One important thing to notice about this verse: the English translation above correctly reflects the Greek, when it says that Christ was put to death "in the flesh" but made alive "in the Spirit." This contrast emphasizes that Christ once lived in the flesh--which means the fallen, material realm of this creation--and died in the flesh, and yet when He rose, He rose no longer in the flesh but in the Spirit--that is, His body, while still His same real body, now partakes of the newness, power, and incorruptibility of the Spirit. Christ now is in a new state of being; He rose, not merely to exist again in this old world in the same way, but to a mode of existence that transcends what was before. He is free from death and decay, able to access both this world and the heavenly world, and He bodily ascended into heaven. This has relevance for what follows.

Therefore most scholars today think that Peter is talking about Christ's resurrection and ascension into heaven, after He atoned for our sins and accomplished redemption. He entered heaven in victory, as a returning conqueror, and announced His victory and rule over the evil spirits.

-When does this going and preaching occur? After the resurrection and ascension.
-Where does this occur? In heaven (the heavenly realm).
-What is the preaching? Not the offer of salvation, but the announcement of Christ's victory and rule over His enemies.
-To whom does this preaching occur? The evil spirits.

Let's examine what else Peter says about these spirits and their imprisonment.

3:20: "who once were disobedient, when the patience of God kept waiting in the days of Noah, during the construction of the ark, in which a few, that is, eight persons, were brought safely through the water." This verse describes who these spirits are. Peter is speaking of those evil spirits who rebelled against God during the antediluvian period (the age before the flood), who we read about in Genesis 6:1-6. According to the common interpretation of this passage in Peter's day, these were angelic beings who left their own realm, wickedly mixed with the human race, and incurred judgment upon themselves. The flood happened, in large part, because of them and their evil influence on human beings. It is interesting that Peter refers to them again in 2 Peter 2:4 (which speaks of their disobedience and subsequent imprisonment), and so does Jude in Jude 1:6. Although this story is less familiar today, it was widely known in Peter's day, and his readers would not have struggled to recognize who he was talking about. Once again, we see there is no esoteric knowledge here. Peter is working with stories and concepts that his readers already knew from the Bible.

Since we know who these spirits are, it is plain that Jesus's proclamation to them was not for the purpose of salvation. 2 Peter 2:4 and Jude 1:6 tell us these beings are being kept in prison for judgment. Why then did Jesus preach to them? We aren't given the content of the preaching, but it is easy to imagine a declaration of victory or a proclamation of His rule. The hosts of hell were not only defeated by Christ, but they were told that they were defeated. One is reminded of Colossians 2:15: "When He had disarmed the rulers and authorities, He made a public display of them, having triumphed over them through Him." The entire letter of 1 Peter was written to encourage struggling, persecuted believers who find themselves as strangers and outcasts in the world. They are misunderstood and mistreated, thought of as worthless nobodies. But the truth is, they are a holy nation and royal priesthood, a people for God's own possession. They are precious to God. In the context around 3:18-22, Peter is encouraging his readers to look to and follow the example of Christ, who was Himself despised and rejected, although precious to God. And just as Jesus suffered greatly, yet ultimately was vindicated, rising from the dead and triumphing over His enemies, so Christians should take heart, because they too will experience victory over their enemies in the future. The function of 3:18-22, therefore, is to encourage Christians by emphasizing that Jesus defeated the Satanic hosts who meant evil for God and God's people. Jesus died for our sins, rose from the dead, and is now sitting at the right hand of God, having humiliated His enemies. The hearts of Christians should be strengthened by this, and see in Jesus the pattern of their own experience.

The simple answer is that 4:6 is not related to 3:18-22. Peter isn't returning to his previous point, but has moved on, and makes a fresh point in 4:6. In 4:6, the preaching to those who are dead is not the same as the preaching of Jesus to the evil spirits in prison in 3:19. Note that in 4:6 Peter does not say that Jesus did the preaching, and does not say that the dead are spirits in prison. He identifies the content of the preaching as "the gospel," and makes it clear that "the dead" are human beings ("that though they are judged in the flesh as men"). We are therefore talking about two very different things.

The preaching of the gospel to the dead in 4:6 means, not that the gospel was preached to people after they died, but before they died. That is, at the time of the writing of the letter they were dead, and so Peter calls them "the dead," because they were then dead; yet those dead people had the gospel preached to them during their lives. Peter's point is that the gospel is relevant not only for living people, but also for people who have died, because, as he says in 4:5, Christ will judge "the living and the dead." Jesus Christ is going to judge the entire world, not only those who remain alive when He returns, but absolutely everyone; and that is why the gospel was preached beforehand to people now dead, because all need the gospel, and our need for the gospel continues beyond our deaths. This idea contrasts the biblical worldview with the pagan worldview, because pagans believed a dead person was gone forever. You only live once, they say. Eat, drink, and be merry, for tomorrow we die; and for this reason they pursue all kinds of debauchery (1 Peter 4:2-4). But according to the Bible, no one dead is gone forever, for all will one day be raised again to be judged. That's why we preach the gospel to people even though they die. And those who believe the gospel, although they die and so appear condemned in the flesh, are in fact accepted by God and will live in the spirit. This recalls John 11:25: "I am the resurrection and the life; he who believes in Me will live even if he dies." Read 4:6 again with perspective, and it should click.

Thanks so much for the great question, L---. It's one that many people have, and our difficulty in comprehending these texts is because we think they're way more mysterious than they really are. We just need to notice at the outset that Peter assumes his readers know what he's talking about.

Please let me know if you have any questions about what I've said.

The Lord bless you and strengthen your faith in His Son.
With love in Christ,
-Eli
Posted by Eli at 5:33 PM

Very well written to be better understand this passage